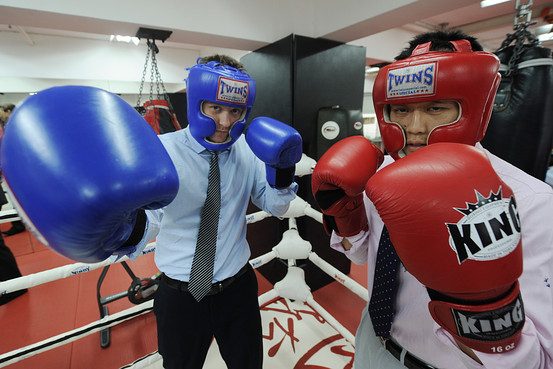 Danny Lee works in an office in central Hong Kong. On Saturday night, he will step into the ring for the first and probably only boxing match of his life.

“If I get beat up or crunched in the first minute, I’ve got to leave town,” he says, sipping an iced coffee. We meet outside because he says the smell of the Chinese balm from the bandage on his wrist makes sitting in closed spaces unpleasant.

The 43-year-old, who grew up mainly in Vancouver, is one of 14 people taking part in a white collar boxing night at the Intercontinental Hotel in Kowloon. After his fight, Mr. Lee will shower, change into his tuxedo, and join friends for dinner at one of the ringside tables.

In addition to learning how to fight, white collar boxers commit to bringing people to the charity event. A table for 10 on Saturday starts at 26,000 Hong Kong dollars ($3,350), Mr. Lee says, adding that he has booked in 40 people. Proceeds go to the Children’s Surgical Centre in Cambodia.

The first white collar boxing event was held by Gleason’s Gym in Brooklyn in 1988. The formula has spread world-wide. Saturday’s event in Hong Kong is organized by Singapore-based Vanda Promotions, which also runs the 12-week training program for the boxers, who generally work in office jobs and have no prior boxing experience.

“I had a couple of friends who had done it, and they said, ‘You know what, somebody should go, it is a good night out.’ Next thing you know, I’m doing it,” says Mr. Lee, a sales director at a financial technology services company.

“That first time you get hit in the skull, cleanly, there’s nothing that compares to that. Even with headgear, the sound of your skull is just like, crack!”

Boxing didn’t feature in the initial training, Mr. Lee says. But it was still tough.

“They just beat you up on fitness. The first couple of weeks was basically burpees, sprint runs and crunches,” he says. “The first thing they made us do was nonstop burpees for seven minutes to see how many we could do. Some people just collapsed, some people never came back.”

Mr. Lee took up lessons at another gym so he could try sparring. That was a shock too.

“That first time you get hit in the skull, cleanly, there’s nothing that compares to that. Even with headgear, the sound of your skull is just like, crack!” he says. “The moments when I had an epiphany: the first was the seven minutes of burpees, the second was getting that first real solid knock to the skull by a guy who was maybe 130-140 pounds. That was a wake-up. I was like, ‘This is not cool man.'”

A third came at the sessions with the other white collar boxers, when the trainer—a mixed martial artist—hit everyone with body shots. “He knocked the wind out of every guy. He punched right through the guts, right in the solar plexus. Boom, to the floor, everybody.”

Mr. Lee didn’t give up. He trained three nights a week with the Vanda group and had extra one-on-one sessions. He even signed up for training when he was in Vancouver for his cousin’s wedding. “I found someone to spar with. He schooled me.”

The one-on-one sessions were mostly learning technique: how to throw a punch, and take one. “The natural thing is to blink if someone punches you. The problem is, when you blink, you are going to get hit again, and again. You’ve got to keep your eyes open.” 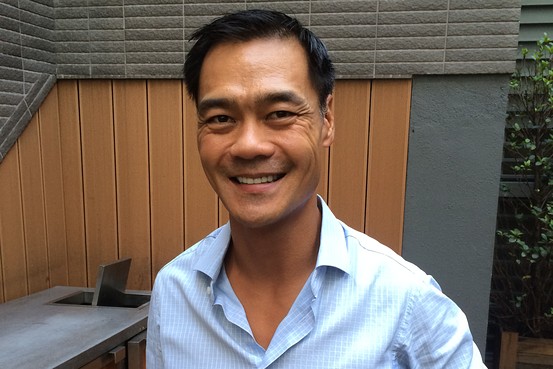 Danny Lee in Hong Kong on Wednesday. Will Davies

After three months of training, Mr. Lee’s weight hasn’t changed. At 69 kilograms, he is the lightest male fighter in the group. He was told he should put on a few pounds, but it hasn’t worked, despite his best efforts.

For breakfast, he has a protein shake and eats two or three Weetabix with bananas, blueberries and whole fat milk: “I’ll go through a gallon of milk a week, easily.” Lunch is generally two sandwiches and a bag of chips. Before evening training, he has a couple of energy bars. Dinner could be pasta, steak or a whole chicken followed by ice cream, maybe some peanut butter and another protein shake.

Mr. Lee says he also hasn’t touched a drop of alcohol for the past three months, except for a day off at his cousin’s wedding more than a month ago. “I still go out, but there’s no happy hour for nonalcoholic drinks, so it still costs me as much.”

The teetotaling has given him a fresh perspective on nights out in Hong Kong’s busy bar districts. “I’d meet my friends for dinner and they’d carry on having drinks. By midnight or one o’clock you have to rip the cord because they’re on a different plane, their conversations don’t make sense anymore,” he says. “It’s been interesting, seeing the world with bright eyes at midnight on Wyndham Street.”

Mr. Lee says he was always pretty fit thanks to regular trips to the gym and hikes or runs around Hong Kong’s Peak. The difference in the past three months has been the intensity. He can now also skip much better, going for up to 20 minutes with a rope compared with just three minutes or so before.

“It’s a good regimen because once you know what you’re doing, you just basically get gloves and a bag and a skip rope and you’re good for an hour…I guess it is much more entertaining than just lying down and pressing steel,” he says.

In the lead up to the fight, the training has eased. Days off are now about doing nothing, like sitting on the sofa or lying in the bathtub, Mr. Lee says. “There was a period when I was clearly overtraining—I was just tired.”

On Saturday night, he is fighting 29-year-old Miguel Sevilla from the Philippines. All the boxers have trained together, and it is during the sessions that the coaches assess who is most suited as opponents. The group includes four women.

Mr. Lee, who leaves on a business trip to London on Sunday, isn’t anxious about the fight. “I was a little bit nervous when I was not sure about fighting, but I think it is time to get it over with…It’ll hurt, there’s no doubt that there’s going to be a bit of hurt on the night.”

Afterward he will probably retire his boxing moniker, Danny “The Demoralizer” Lee. Why that title? He says it comes from the name of his handball team at school. “I’ve also been told I’ve led a lot of people down demoralizing paths,” he adds, with a laugh.

Write to Will Davies at william.davies@wsj.com