Hong Kong (AFP) – Filipino boxing star Manny Pacquiao said he hoped to finally step in the ring with arch-rival Floyd Mayweather next year as he denied he was taking his upcoming opponent Chris Algieri lightly.

Pacquiao, mobbed by his supporters during a promotional trip to Hong Kong, said “I’m crossing my fingers” that the hotly anticipated Mayweather fight could happen in 2015.

“Hopefully that fight will happen by next year,” he told AFP in an interview.

“I’m crossing my fingers that that fight will happen but right now my mind is already set to focus on my next fight with Algieri. I think the time to talk about that issue is after the fight.”

The eyes of the boxing world have long been on a showdown between the unbeaten American and eight-division world champion Pacquiao (56-5-2), two of the greatest boxers of their generation.

The two regularly exchange taunts with “Money” Mayweather recently posting pictures of Pacquiao’s losses, and the Filipino last month telling his rival to stop “blabbing” and fight him. 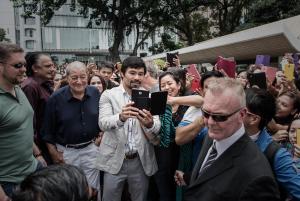 Pacquiao, 35, said he had a “couple of years” left before retiring — seemingly ample time to secure the money-spinning fight, if the two sides’ promoters can settle their differences.

But he said his immediate focus was on his November 23 World Boxing Organization welterweight title defence in Macau against former kickboxer Algieri.

Pacquiao previously dismissed the American as only an “okay” fighter, and this month he took a break from training to make his professional basketball debut in the Philippines’ domestic league.

But he denied underestimating Algieri (20-0) and said he had been training to face a taller fighter. Algieri is about nine centimetres (3.5 inches) taller than the 1.69-metre (5ft 7in) Pacquiao. 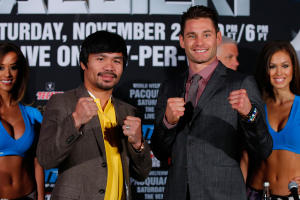 “No, absolutely I’m not taking this fight lightly because I know his hunger and he’s young and he wants to win the fight, but I will not let that happen,” Pacquiao said.

“I’m not thinking about the knock-out because it will make me confident and careless,” he added. “If the knock-out comes it will come but my focus is to make sure that 100 percent condition and killer instinct is there, the aggressiveness is there, so that’s my focus in training.”

Pacquiao also said he was inspired by the enthusiastic support he had received in Hong Kong, home to a large community of expatriate Filipinos.

“I feel so very happy because I met a lot of Filipinos here in Hong Kong and I was surprised because I didn’t expect a lot of people in the streets,” he said.

“The cheer of the people, their support, it helps a lot. It gives more inspiration and determination to focus and fight,” added the boxer.