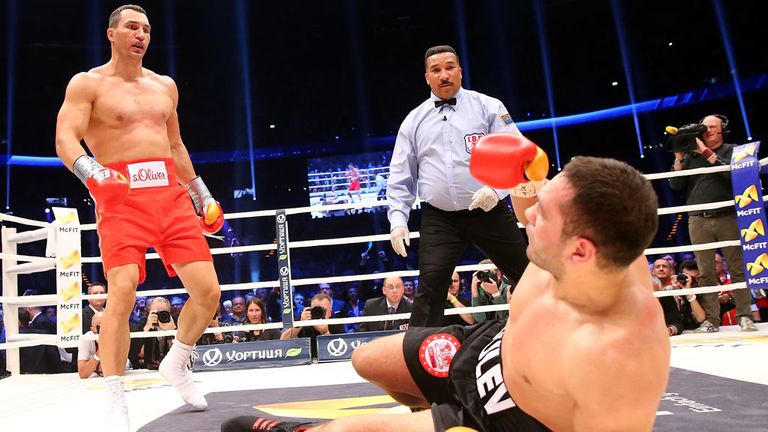 The WBA, IBF and WBO champion produced yet another dominant performance, flooring his Bulgarian challenger on three occasions before a lightning left hook put Pulev flat on his back in the fifth.

At the age of 38, Klitschko is showing no signs of decline and he repelled another previously unbeaten challenger in a 17th consecutive title defence.

Pulev’s stiff jab in the opener suggested he would pose a test, but his confidence drained away after a left hook dumped him on the canvas. He was floored again by the fired-up Ukrainian soon after, although it appeared a shove, and was relieved to hear the bell.

Klitschko controlled the second round, with Pulev on the retreat, and he was staggered again by a right hand in the third before a left sent him down for a third time.

The man from Sofia was sporting a cut eye as he again survived the round and battled back bravely in the fourth before ‘Dr Steelhammer’ ended the contest suddenly in the fifth.

Pulev appeared to briefly trouble Klitschko with a right hand, but he quickly regained his composure and a sweeping left hand sent his spread-eagled opponent onto the canvas. Referee Tony Weeks quickly waved it off with Pulev showing no signs of beating the count.

“To Pulev’s fans I want to say, you have to be sporting, Pulev fought a good fight,” said Klitschko. “It was hard to work, the left jab. Pulev prepared well.”